The Old Grumbler by Julius Fučik arranged for SATB sax quartet. The bari sax takes center stage in this quartet arrangement of the well known comic polka by Fučik. This novelty piece is also known as “The Grouchy Old Bear”, “Starý Bručoun”, “The Bear with the Sore-Head”, or “Der Alte Brummbar”.

The soprano, alto, and tenor parts are moderately easy. The featured bari sax part is a little more difficult. Score and parts are 8.5″ x 11″ 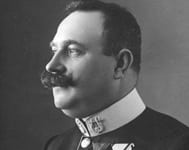 Julius Fučík (Czech: ; 18 July 1872 – 25 September 1916) was a Czech composer and conductor of military bands. He became a prolific composer, with over 400 marches, polkas, and waltzes to his name. As most of his work was for military bands, he is sometimes known as the “Bohemian Sousa”.

Today his marches are still played as patriotic music in the Czech Republic. His worldwide reputation rests primarily on two works: “The Florentiner March”, popular throughout much of Europe, and the “Entrance of the Gladiators” (Vjezd gladiátorů), which is widely recognized, often under the title “Thunder and Blazes”, as one of the most popular circus marches.