Glazunov wrote the Five Novelettes during the mid-1880s, originally giving the set the invocative title of `Suite’. At the suggestion of his friend Hans von Bulow, the famous pianist and conductor, Glazunov changed the name to Novelettes. Each of the colorful movements evokes a national style. This piece is the third section of that opus.  Interlude in Ancient Style (Interludium in modo antico), is a set of variations on a plaintive but noble theme. It has distinct allusions to the Russian Orthodox service, both in tonality and solemn mood.

Aleander Glazunov composed two notable works for saxophones. His Saxophone Quartet (1932), and the Saxophone Concerto (1934), showed his ability to adapt to Western fashions in music late in his career. The earlier rebellions of the experimental, serialist and minimalist movements passed him by and he never shied away from the polished manner he had perfected at the turn of the century. 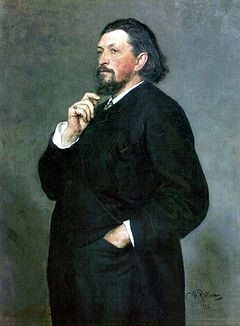 Glazunov was born in St Petersburg. He studied music privately under Nikolai Rimsky-Korsakov.

The first of his nine symphonies premiered in 1882 when Glazunov was 16 years old. His popular symphonic poem, Stenka Razin, was also a youthful work. Glazunov also wrote three ballets.

In 1899, Glazunov became a professor at the Saint Petersburg School of Music, and later its director. Glazunov left Russia in 1928 never to return. He toured Europe and the United States, and settled in Paris, where he died. He came to be acknowledged as a great prodigy in his field, and with the help of his mentor and friend Rimsky-Korsakov, completed some of Alexander Borodin’s great works, the most famous being the opera Prince Igor, including the popular Polovetsian Dances.