The Ragtime Dance by Joplin, arranged for saxophone quartet AATB or SATB. Joplin wrote two works with the title “The Ragtime Dance”. The first, written in 1899 and published in 1902, is something like a ballet with songs and a speaking part for narrator. It was a failure on stage and is now forgotten. The second and much better known work is a piano rag based on some of the tunes in the stage show. This little piano rag is one of the genre’s most loved pieces and has been transcribed for many different ensembles. It has been used in many films, most notably in the 1973 movie “The Sting”.

This arrangement is is for SATB or AATB saxophone quartet and is in the original key. What everyone always remembers about The Ragtime Dance is the moment when Joplin asks the performers to vigorously stomp the floor in rhythm! This transcription is in the original keys of B flat and E flat. 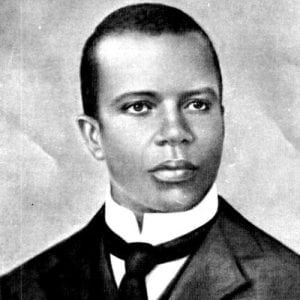 Scott Joplin was “the King of Ragtime Writers”. He was a composer who elevated lowly entertainment associated with saloons and brothels into an American art form. Born in Texas in 1867 or 1868, Joplin was raised in Texarkana, the son of a laborer and former slave. As a child, Joplin taught himself piano on an instrument belonging to a white family that allowed him access to it. Later he studied with a German-born teacher who introduced him to classical music. Joplin attended high school in Sedalia, MO, a town that would serve as Joplin’s home base during his most prosperous years, and where a museum now bears his name.

In 1899, publisher John Stark of Sedalia issued Joplin’s second ragtime composition, “Maple Leaf Rag.” Although it wasn’t immediately a hit, after a few years the popularity of “Maple Leaf Rag” was so enormous that it made Joplin’s name; and Joplin earned a small percentage of income from it for the rest of his life. Joplin moved to St. Louis in 1901. There he wrote many of the other rags he is known for during this time, including “The Entertainer,” “The Easy Winners,” and “Elite Syncopations.”

From 1911 until his death in 1917 most of Joplin’s efforts went into his opera, Treemonishia, which he heard in concert but never managed to stage during his lifetime. Joplin formed his own music company and published his final piano rag, “Magnetic Rag” (1914), one of his best. By this time, debilitating, long-term effects of syphilis were beginning to break down Joplin’s health.

“Maple Leaf Rag” remained a constant in popular music throughout the Jazz Age, but the better part of Joplin’s work remained unknown until the “ragtime revival” of the early ’70s, when “Scott Joplin” became a household name. Houston Grand Opera even staged his opera “Treemonishia” .

Joplin died convinced that he had failed to achieve success as an African-American composer of serious music. Today, he would be astounded to learn that he is one of the most successful African-American composer of serious music that ever lived. Some of his works have been recorded hundreds of times and arranged for practically every conceivable instrumental combination, played by everything from symphony orchestras to ice cream trucks – even saxophone quartets..

Be the first to review “The Ragtime Dance” Cancel reply