Première Arabesque, by Claude Debussy, arranged for Saxophone Quartet SATB. The Premiere  Arabesque is one of pair of arabesques Claude Debussy composed when he was still in his twenties, between the years 1888 and 1891. Although an early work, the arabesque contains hints of Debussy’s developing musical style. It is one of his early impressionistic pieces. Debussy seems to wander through modes and keys to create an evocative scene through music.

Claude Debussy was a popular French composer who, together with Maurice Ravel, was among the most prominent figures in Impressionist music. He was also one of the most influential composers of the early 20th century. Saxophone players know him for his Rhapsodie for Saxophone and Orchestra, a commission he somewhat unwilling accepted.

Be the first to review “Premiere Arabesque” Cancel reply 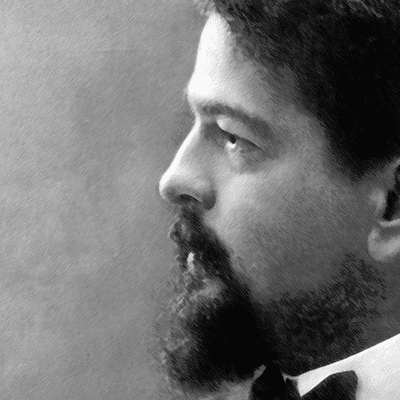 Claude Debussy was born on August 22, 1862 in France. He was the eldest of five children. At age seven, Claude started taking piano lessons which were paid for by his aunt. By the age of 10, Claude’s talent became evident and he entered the Paris Conservatoire where he spent his next 11 years. During his time in Paris, he studied composition, music theory and history, harmony, piano and organ.

After completing his Conservatory studies and travels around Europe and Russia, at the age of 22 in he won the Prix de Rome. This was a competition for many different composers and Debussy took home the top prize. This prize allowed him to study for two years in the Italian capital of Rome. While Rome, he studied Richard Wagner’s music and especially the opera Tristan und Isolde.

Years later he completed his opera Pelleas et Melisande. The success of this work earned Debussy great recognition. Over the next 10 years, he was a leading figure in the French music scene. Other works that he wrote include La Mer in 1905, Iberia in 1908, Images in 1905 and Children’s Corner Suite in 1908.

Debussy lead a turbulent personal life with many stormy relationships and public scandals. In 1908, Claude married Emma Bardac and the couple had a child together. They were married for the remainder of Debussy’s life.