Album Leaf for Frau Betty Schott, by Richard Wagner, arranged for Saxophone Quartet SATB. Wagner composed the Album Leaf in 1875. The piano piece was a gift for Betty Schott, the wife of one of his publishers. Like his Siegfried Idyll, it uses themes and motifs from the last act of Wagner’s opera Siegfried.

The piano version of Album Leaf for Frau Betty Schott is in the key of E flat major. The arrangement for saxophone quartet is in the original key. As you’d expect of Wagner, the piece is very chromatic. There are some clashing dissonances that resolve into beautiful harmonies. Motifs and melodies pass between all the parts. There is no place to hide in this piece.

Richard Wagner, opera/music drama composer and impresario, was not a good man. Bluntly, he was a bigoted con artist with a reputation for borrowing – but not repaying – large sums of money from anyone who would lend it to him.

Until his final years, Wagner’s life was characterized by political exile, turbulent love affairs, poverty and repeated flight from his creditors. His controversial writings on music, drama and politics have attracted extensive comment, notably, since the late 20th century, where they express anti-Semitic sentiments. For all that, there is no denying his influence on the modern music. The effect of his ideas can be traced in many of the arts throughout the 20th century; his influence spread beyond composition into conducting, philosophy, literature, the visual arts and theater. 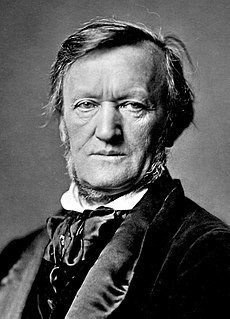 Wilhelm Richard Wagner was born into a large German family on 22 May, 1813 in Leipzig, Germany. He went on to become one of the world’s most influential—and controversial—composers. He is famous for both his epic operas, including the four-part, 18-hour Ring Cycle, as well as for his anti-semitic writings. Wagner had a tumultuous love life, which involved several scandalous affairs. He died of a heart attack in Venice on February 13, 1883.

Despite the enduring controversy over his religious and political views, Wagner’s works have been performed by musicians since the 19th century, although some performances have caused a public outcry. For some, Wagner’s anti-Semitism diminishes or invalidates his accomplishment as a composer; for others, however, it is merely a personality flaw that has no bearing on his landmark status in the history of Western music.